If you would like to be a beekeeper and would like bees for free (freebees) you can make a simple cheap swarm trap from some discarded dresser drawers.

You should probably know about the three kinds of bees in a hive as well as why bees swarm. Should you want to see a whole lot more specific bee info I’d go to bushfarms.com and beesource.com. Below is a brief overview of bees and why they swarm. Otherwise you can go to Step one.

Most people know about the one (or sometimes 2) special bee(s) called the queen.

Mating – after a swarm has left newly hatched queen will mate with several drones and return to the hive. She will then get really fat and swell up with eggs and begin laying.

Catching a swarm!!!
Our goal is to get a queen and her bees to decide that we’ve got a nice place to live and move in. It’s kind of like fishing for bees.

Overview of a good swarm trap

When do you catch swarms?

Why do they say this?
Because if you catch the bees before July they just might make a surplus of honey that you can harvest. During July or after, you will have to feed your bees to make sure that they stand a chance to survive the winter.

Would you want to get bees out of the walls of a house?
Not unless you are getting paid for construction in my opinion. Think about fixing someone’s dry wall, or roof, while a whole mess of bees are rather upset that you are wrecking their house with honey and young.

Swarms on the other hand have no young or honey to defend so most of the time they are really gentle. If anyone you know sees a swarm in their trees, go and get it. All you need to do is shake them in a box and take them to their new hive. They rarely will sting you. I also suggest you spritz them with some sugar water to keep them full and happy. 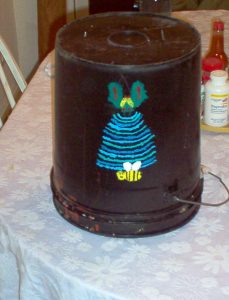 (my first swarm trap prototype) (its better to use the drawers)